Gathering together at the Paramount Theater for a fundraising event benefiting the Mona Foundation, Rainn Wilson and local celebrities joined forces to support grass-roots education initiatives happening around the globe. If you’re a fan of sitcoms, you are undoubtedly aware that Rainn Wilson is quite possibly the greatest 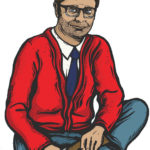 comedic presence to ever represent the Northwest. His television series “The Office” ran for 9 seasons and was voted #5 on Rankers list of Greatest Sitcoms in Television History. Hot on his heels for the title of funniest Seattleite, and joining Rainn onstage last month was Hollywood darling Joel McHale; the Almost-Live alumni who crushed it with his own series Community, which ran for a very respectable 6 seasons.

Since breaking into the business in 1993, McHale has stretched his acting chops with roles in everything from Spiderman to Sons of Anarchy (not to mention appearing in one of my all-time Adam Sandler favorites “Blended”). Recently the two got together, along with grungetastic musician Chris Ballew (Presidents of the United States of America/Caspar Babypants) and a number of other celebrities with a goal of raising both money and awareness for the Mona Foundation, a non-profit whose mission is to champion educational initiatives around the world.

Joining Wilson, McHale, and Ballew at the event were Rachael & Vilray, Jack Lenz, the Toronto Youth Choir, and Northside Step Team.In the early 1980s Rainn attended Shorecrest High School, just north of 145th in the Shoreline area of Seattle, before going on to graduate from the University of Washington with a BA in Drama. Most recently Rainn starred alongside Jason Statham in The Meg, and has published an autobiography titled “the Bassoon King.”